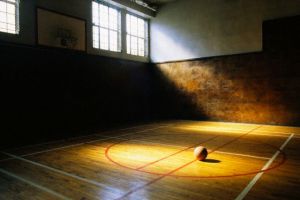 This weekend Value City Arena will host the OHSAA boys basketball state tournament. Just down Lane Avenue over the bridge, the Varsity Club will host high school basketball fans. You can join the conversation between games and enjoy a cold beverage before walking back to the Schott for the next game; or you can stay there all day and watch the games on STO. Whether you watch them live or on the big screen at the VC, its sure to be a good time. There will be a few groups of storytellers sure to be in attendance. Count on that.
Let the stories begin… When I was a junior at Ottawa-Glandorf High School, we played in the state championship title game and lost by one point. We had an unbelievable season and nearly pulled off an amazing 21-point-comeback championship victory, but it wasn’t meant to be. Coincidentally the school that beat us in 1996 won the semi-final game this afternoon and will play Saturday for another chance at a title. Orrville High School. If they win on Saturday, as part of my work’s partnership with the OHSAA, I will deliver a congratulatory speech to their team. – I am hoping Lima Central Catholic wins that game; but the kicker is that Lima beat Ottawa-Glandorf in this year’s regional tournament to get to the state tournament… Either way, O-G lost. And that finally is the point of this post… To the winner go the spoils, and no one remembers the losers. (Except maybe the story-telling patrons at the Varsity Club)
I will always remember the one-point loss to Orrville as a heartbreaker, but I will remember the emotional distraught of our seniors, coaches, and fans more than the loss.
I use this example of community comradery because its relevant to the curent events of the weekend for one, but also because it represents the essence of high school sports. For the past month, I have watched high school athletes win and lose in the state tournament of their respective winter sport. Wrestling, Swimming, and most recently girl’s and boy’s basketball tournaments have built character and taught lessons of sportmanship, integrity, and class to the athletes competing through the elation of winning and agony of defeat. I’m a firm believer we learn more about our personal fortitude through defeat than we do in winning, but that doesn’t make it any easier to accept, especially at 17 years old.
I have been fortunate to watch many high school sporting events here of late due in part to the Refuel with Chocolate Milk campaign; and the one lasting image that stays with me is the image of an athlete brought to tears at the realization of their final game/match/event as a high school athlete resulting in a loss. To have come so far, but not far enough. I have to say, as an athlete who has been in those shoes, it’s a difficult situation to find yourself in; and managing those emotions can be impossible for the kid who literally invested his/her entire personal commitment to that team. For many, it’s their first true love. It may be overwhelming. Numbing. Maybe even sickening. But at the end of that bus trip home is a welcome reception… A community proud of their team. They may not have won first place, but even the consolation prize of a state tournament deserves respect from a community who have reaped so many exciting memories as a result of those 15-17 year old kids. The second place team may not have won gold, but they became stronger young men and women through the process; which reassures my belief that sport creates a greater good in our communities… A utilitarian greater-good that brings forth teamwork, commitment, and trust among young people. I hope all the teams competing this weekend as well as those communities enjoy the experience of a state tournament as much as I did fourteen years ago… even the kids from Orrville.